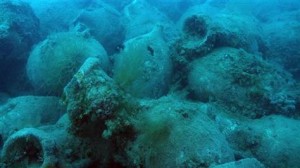 A team of American and Albanian archeologists found a well preserved Roman ship wreck off the Albanian coast with 300, unfortunately empty wine jugs, reports Associated Press. The thirty meters long ship wreck dates from the first century BC. The ship transported wine from vineyards in southern Albania to European markets, perhaps in Gaul (France). Albania was part of ancient Illyria. The Romans conquered the Illyrian coast around 100 BC. The wreck was found near the port city of Vlora, 140 kilometers southwest of the capital Tirana. The team of US-Albanian archaeologists has been investigating the Albanian coast for five years and has found twenty shipwrecks. The Roman wreck lies 50 meters under water and is very well preserved. According to the Albanian archaeologist Adrian Anastasi it belongs in the top ten of scientifically most interesting ancient wrecks in the Mediterranean. Archaeologists have examined a wine jug and then put it back in the wreck. The contents were washed away, but the jar is intact. The wreck is left undisturbed until the Albanians are in a position to explore it. Therefore, the exact location of the find is kept secret.