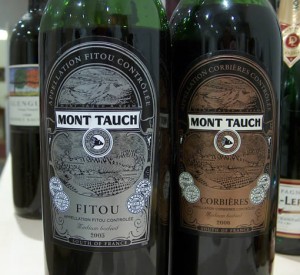 400,000 bottles of counterfeit Fitou wine circulate on the Chinese market. The bottles probably contain Chinese “wine”. The counterfeiters have copied the label and the bottle of the cooperative Mont Tauch, one of the major companies in the wine appellation of Fitou. Both are internationally registered. The counterfeit wine was discovered by the representative of Mont Tauch on the Chinese market, Wang Yu. Jean-Marc Astruc, president of the Syndicat du Cru Fitou, is heart stricken. “They copy what is successful,” he says in the southern French newspaper La Depeche. “The Sud de France brand is very popular in China.” The counterfeit bottles are sold for a much lower price than the real stuff. Fraud threatens the export of Fitou and southern French wines in general to China. It is impossible to compete with the lower prices of the fraudulent wine. Moreover, the image of Fitou is affected by wines of inferior quality. Mont Tauch does not know how to react. “It is very difficult to work in China,” said a representative of the cooperative wine company. “We are collecting our arguments.” The syndicate of Fitou will appeal to the responsible minister and hopes he can stop the counterfeiting. The wines of Mont Tauch have a good reputation. “They are affordable, well made, modern, and have a sense of place about them,” says the British wine critic Jamie Goode on his blog.