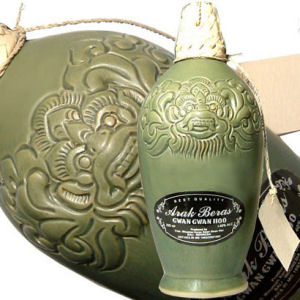 Twenty-two people, including two Britons, have died on the Indonesian island of Bali after drinking poisoned rice wine (arrack), UPI reports. The victims bought the arrack at a stall along the road in Canggu, North Kuta. One young Dutch tourist died on the Indonesian island of Lombok after drinking rice wine from the same batch, the Dutch newspaper AD reports. Two other tourists died on Lombok after drinking the poisoned wine. This brings the total death toll to 25 people. Twenty-one people are treated in hospital. The Indonseian police arrested  the owner and two employees of the arrack factory in Denpasar, the capital of Bali. They found empty arrack barrels with traces of methanol, which is often used as solvents and antifreeze. It is not yet clear whether the methanol was added on purpose to the rice wine. Some of the victims died in extreme agony. Methanol poisoning is difficult to treat. The poison destroys the eyes, liver and kidney of the victim. While called rice wine, arrack is actually a a colourless, sugarless distilled beverage, often made from fermented coconut, but sometimes also made from fermented palm sap and rice. It is not to be confused with the aniseed flavoured “arak” from Arabia. To confuse matters further, arrack is actually called arak in Bali. Gde Sugianyar, Bali police spokesman, advised Balinese and tourists to avoid unlabelled drinks as a precaution.