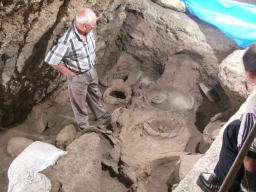 A team of archaeologists from Armenia, Ireland and the University of California at Los Angeles (UCLA) found a six thousand years old wine-making facility in Armenia. The winery is dated 4100 BCE, and is one thousand years older than the oldest comparable discovery in the eighties in Egypt in the tomb of King Scorpion I (dated around 3150 BCE). The archaeologists discovered the winery in an old Armenian cave, part of a complex of caves in an ancient canyon in the Little Caucasus mountains, near the southern border of Armenia with Iran. The cave is situated just outside a small Armenian village that today still produces wine. In the cave, everything was found to make wine, including grapes (both the seeds and remains of pressed grapes were found), a rudimentary wine press, a fermentation vessel of clay, wine-soaked pottery chards and even a cup and a drinking bowl. In the same cave earlier this summer the world’s oldest known leather shoes was found (dated around 5500 BCE). An article about the discovery appeared on January 11 in the online version of the Journal of Archaeological Science (ISSN: 0305-4403).