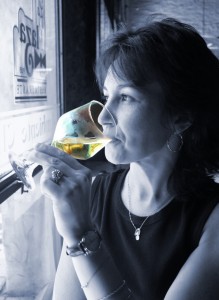 According to a study by the Fred Hutchinson Cancer Research Center in Seattle, even moderate alcohol consumption increases the risk of breast cancer. Women who drink 14 units of alcohol a week have a 24 percent greater risk of breast cancer than abstainers. Fourteen units of alcohol is regarded as moderate alcohol consumption, seven units is the recommended ‘safe level’. The type of alcohol makes no difference and red wine is not ‘healthier’ than white. The researchers surveyed 6,327 American women with breast cancer and 7,558 other women from the same age group (20-69 years) about their alcohol consumption and other risk factors for breast cancer, such as time of first pregnancy, family history and hormone use after the menopause. It is the largest study of its kind to date. The results seem to be confirmed by a study recently published in the Journal of the National Cancer Institute. The researchers studied 2,944 breast cancer patients according to their alcohol intake. The researchers conclude that even one glass of wine per day (seven units per week) significantly increases the probability of a particular type of hormonal breast cancer. This type of cancer occurs most frequently in women between 45 and 55 years. This study did not include the various types of alcohol.