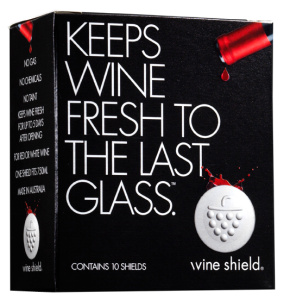 The Australian inventor Barry Rees has invented a thin plastic disc that preserves the freshness of an opened bottle of wine for several days. You put the disc on top of the wine in an opened bottle with a special tool. The disc protects the wine from oxidation for up to five days, provided that the bottle is stored in the refrigerator. The discs are called Wine Shield or Wine Preserva, cost 38 Australian cents each (27 eurocents; 33 dollarcents) and are marketed by Wine Preserva Holdings. The flexible plastic disc consists of two parts. The exterior is made of low density recyclable polyethylene, the interior consists of plastic bubbles, making the disc floats. The outside does not react with the wine. It is made of the same inert material that also covers crown corks and Stelvin corks. You inset the disc in the bottle with a kind of pliers. That takes no longer than five seconds. The disc is generally not reusable, but the recyclable plastic can be removed from the bottle during recycling. Wine Preserva is especially designed for cafés, restaurants and bistros. You can pour wine from the bottle while it is protected against oxidation. The alternatives such as nitrogen gas or a vacuum stopper cost too much time. Wine Preserva is not currently available in Europe, but Wine Preserva Holdings is looking for distributors. In the U.S. home users can order the discs from Wine Hardware Store and restaurants from Franmara and the Wine Appreciation Guild, all in California. The following video shows how to insert the disc in the bottle.