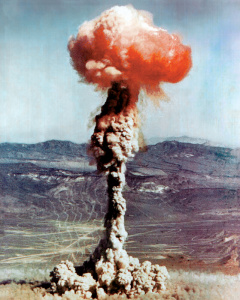 A team of Australian chemists led by Dr. Graham Johnson (University of Adelaide) has managed to date accurately twenty Australian wines from the period 1958-1997 . Their dating method is based on measuring the isotope carbon-14 that increased significantly in the atmosphere in the years 1944-1963 by nuclear tests in open air. Carbon-14 is every year diluted a little further by another isotope, carbon-12, released during the combustion of fossil fuels. Before the atomic tests carbon-14 was only produced in the upper layers of the earth atmosphere by the reaction of nitrogen with cosmic rays. From 1944 to 1963 the amount of carbon-14 in the earth biosphere increased by atomic explosions. Both isotopes are absorbed by plants when they absorb carbon dioxide during growth. The new method can be used to identify counterfeit vintage wines. Some say five percent of all old wines are counterfeit.