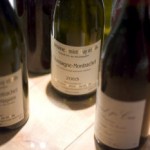 Last year French wine exports fell by almost twenty percent to 5.5 billion euros. This is the lowest level in ten years time. According to official figures from the French export agency Ubifrance the French in 2009 exported 12.5 million hectoliters of wine, 8.7 percent less than in 2008. Champagne had the largest decrease of nearly 28 percent. Bordeaux fell by more than 23 percent, while Burgundy declined by 22.7 percent. The AOC wines were most affected by the decline. Only in China the French in 2009 sold more wine than in 2008. In all other markets, exports fell back.