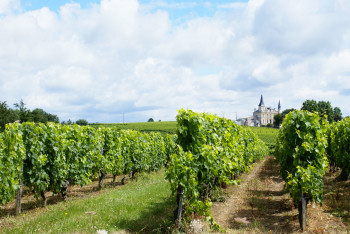 Wine producers in Bordeaux are optimistic about the quality of the harvest in 2009. Comparisons are made with 2005, one of the best vintages in recent decades. After the hot summer everything is well on its way to a perfect Bordeaux harvest. In May and early June the weather was not quite ideal, but from mid June to today Bordeaux experienced an almost perfect summer. Only very bad weather in September could throw a spanner in the works. The previous 2008 vintage was saved by very good weather in September, after a wet and cold summer. If September is as good as last year, then the quality will be much higher, so hope the wine producers. The chance that this will happen is according to the 15-day forecast from Accuweather.com very great: the sun shines until September 10 in Bordeaux, only on one day interrupted by slight rain. The daytime temperature ranges from 22 to 33 degrees centigrade, even with a predicted 29 degrees and sunshine on September 10 next. The grapes ripen more rapidly than usual, both on the left and the right bank of the river Gironde, which splits the Bordeaux wineregion in two. The harvest of the Merlot grapes will probably start mid-September, soon followed by that of Cabernet-Sauvignon.

Not everything is perfect though this year. Some areas have lost many grapes by hail storms in the spring. The quality will be probably good, but the yield in any case very low. Especially the vineyards of Saint-Emilion were severely hit. Also in Côtes de Bourg, Premieres Cotes de Blaye, Côtes de Castillon and Entre-Deux-Mers many grapes were destroyed. There was a lot of hail damage in Margaux and Graves. Chateau Palmer (Margaux) lost two thirds of its harvest on May 11 in a hail storm that lasted barely 15 minutes. Palmer expects to harvest between 20 and 65 percent less grapes than in a normal year. This will undoubtedly affect the price, especially if 2009 turns out to be the very good to great vintage everyone in Bordeaux hopes for.
In our video section you can view an interview with Charles Chevallier of Château Lafite, made by wine journalist Jane Anson.