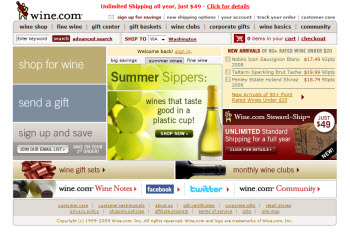 According to the e-Performance Barometer 2009 of the French professor Grégory Bressolles (Bordeaux école de management) Wine.com (USA) is the best wine-related e-commerce site in France and worldwide. Bresolles presented the results of his study at Vinexpo 2009 in Bordeaux. The survey was organized for the second year. 28 sites, twenty French and eight foreign, were evaluated on seven different criteria by an international panel of three thousand surfers. The seven assessment criteria were: information, security and respect for privacy, customer relationship, user friendliness, supply, customization, reliability and design. Winechateau.com (USA) takes the second place in the survey. Third in the ranking is the French site Vinatis.com. The study also shows that the typical wine buyer via the Internet is mostly male (67%), older than 35 years (60%), higher educated (20%). The typical buyer makes at least five purchases per year, and often spends 10 to 20 euros or more per bottle. According to Grégory Bressolles, sales of wine via the Internet increase annually by thirty percent.