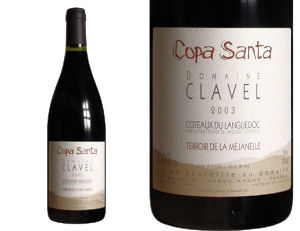 In early February I served my co-members of my tasting group Amovinum a barrel full of surprises – without pity of course: as always we tasted everything double blind. One of the flights was a five year vertical of La Copa Santa, a well known wine of the French AOC Côteaux du Languedoc (in Languedoc-Roussillon), run by the ever amiable Pierre Clavel. This was decidedly the quality prize winner of the evening. These wines still cost only around thirteen euros in Europe, but keep very well and improve in bottle. If you know that I bought La Copa Santa 2001, which the group easily scored 92, for only € 10 … Amazing how young the wine still tasted. La Copa Santa is made from grapes that are planned in the terroir of La Méjanelle: Syrah planted in 1982 and in 1987, Grenache in 1964 and in the better years a little Mourvèdre planted in 1988. La Mejanelle is located in the municipalities Castelnau Le Lez, Saint Aunès and Mauguio in the Département de l’Hérault.

Visibility: – intense – moderately transparent – grenade. Aroma: Intense. Beautiful red fruit of the light type, with sous bois underneath. Someone said: it reminds me of young pinot noir, with some animal aromas and a little game. In the mouth relatively strict with firm tannin / acid combinations, not very long. Nice nose, but mouth still a little too strict.

Visibility: – intense – moderately transparent. Aroma: Intense. Nice nose with understated wood, dark red fruit, spices, evolving fruit. In line with the 1998. In the mouth initially drinks quite easily, but (again) with a bit of a bitter aftertaste. Not bad.

Visibility: – intense – not very transparent. Aroma: Intense. Big dollop of alcohol in the nose, pure dark red fruit that has a touch of overipeness (probably later picked fruit), reminds one a bit of Amarone. In the mouth sweet and a little too easy, lacks tension.