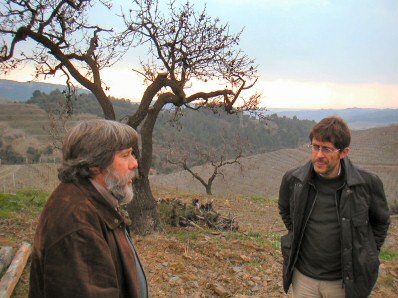 Michiel Carpentier, Dirk Hoet, Ive Marx and I spent the better part of a cold January afternoon with René Barbier, touring his Priorat vinyeards, cellars and tasting several of his new wines.

I was especially impressed by the Manyetes, which is a classical and very elegant wine in need of some bottle age, and clearly underestimated by most critics. According to Babier, “most good Priorats are consumed too soon. Grenache from Priorat schiste (llicorella) is much more ageworthy then Grenache from Chateauneuf-du-Pape (René’s family came to Spain from the Rhône by the way). I have tasted Scala Dei Priorat from the Sixties that was still evolving in a positive sense.”